Last month, I went to Au Pied de Cochon with three of my friends. It was a foodie pilgrimage that was a long time coming- my wonderful friend Zoë and I had been talking about going ever since we were in Rez in 2011.

We had a carefully-crafted plan that involved going in a group, sharing every plate, and resisting the pull of the wine menu so that we could get an amazing food experience for under $50. We succeeded. With tax and a nice tip (because the service was amazing), each of us paid $49.50. AND LORD WAS IT EVER WORTH IT.

Zoë, Carla, Nate and I carefully examined the relatively short menu for much longer than at any other restaurant. We had to be very strategic. I whipped out my phone calculator to do the math- unromantic of me, to be sure, but seriously necessary when every single menu item is calling your name and they’re not particularly cheap.

We ended up deciding on the following plan: start with the carpaccio (which, as we were enormously excited to find out, was duck carpaccio and not beef) and the plogue a champlain (to be explained below). Then we’d share the Canard en Conserve/Duck in a Can, one of APDC’s most famous dishes. We’d finish with one of the pies on the extensive dessert menu.

Things changed a little bit as the meal went on. After devouring the plogue and the carpaccio in less than 2 minutes each, literally scraping every bit of sauce off every plate with our four spoons, we were a little worried that we’d under-ordered. I tried to be stoic and stalwart and stingy, but my three friends looked at me and, with puppy eyes, said “come on….let’s get the foie gras chicken nuggets toooo! Please, mooooom” and they broke me. Good thing I’m not actually a parent.

I’m so glad they did because those chicken nuggets were SO GOOD. More on those in a bit.

Our plan deviated one more time at dessert. Instead of one pie, we ordered two: the sugar pie, a Quebecois traditional dessert that I adore, and a pecan pie. We cleared every single plate put in front of us and emerged victorious.

The plogue a champlain was the first plate to land on our table, brimming with maple syrup and promise. It’s a small buckwheat pancake covered with melted cheddar cheese, bacon, a thick slab of foie gras, and a veritable pool of maple syrup. It was extremely indulgent but somehow, magically, not overwhelmingly rich- maybe because we split it four ways. Either way, we devoured it and spent five minutes after the food was gone spooning up the dregs of syrup and bacon fat. 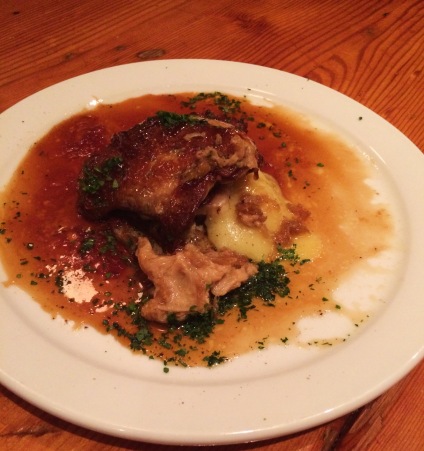 Next, we got the duck carpaccio. It was just beautiful, with thinly sliced mushrooms, shavings of cheddar cheese, herb oil, spicy sauce, dijon mustard, and an egg yolk begging to be bursted. The whole dish was light but full of flavour, and the duck was super fresh-tasting and just slightly gamey. 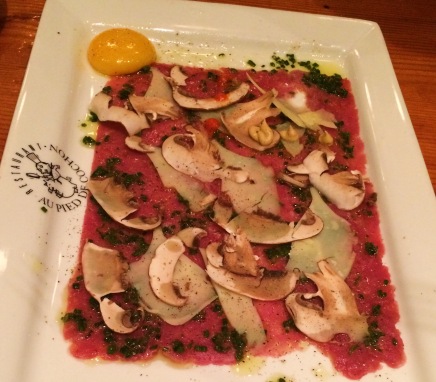 When we had finished our second order of complimentary warm bread and simply unbelievable fancy butter, we were still very hungry and thus panicked and ordered the foie gras chicken nuggets. Best decision ever. They were super-crispy on the outside, and the inside was a little piece of foie gras wrapped in juicy, savoury ground chicken. They came with a little plate of thick, glassy maple syrup that had been cooked down to honey-thickness. MM. 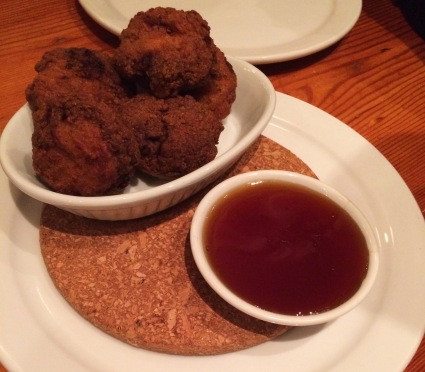 Next, the big show: Duck in a Can. The waiter brought out the can of Canard en Conserve along with a plate with a few toast points and a delicious sweet potato puree. He then opened the can and dumped the contents over the plate. The can lists the ingredients: 1/2 duck breast (magret), 100g of foie gras, 60mL of balsamic vinegar demi-glace, 180mL buttered stewed cabbage, 1/2 head of roasted garlic, and 2 sprigs of thyme. However, I really can’t even explain the extent to which this dish is more than the sum of its parts. Savoury, a little sweet, rich and gravy-like, and perfectly Quebecois, it’s a dish I’ll never forget. 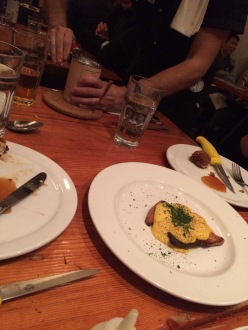 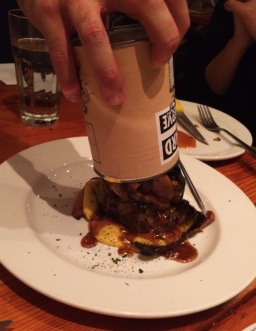 Last, dessert. Both pies were simply outstanding, with flaky crusts and perfect fillings. The sugar pie was sweet as can be with a smooth, light beige sugar and condensed milk filling, and the pecan pie was deeply caramelized- by far the best pecan pie I’d ever tried. Both pies came with a generous boule of house-made vanilla ice cream. 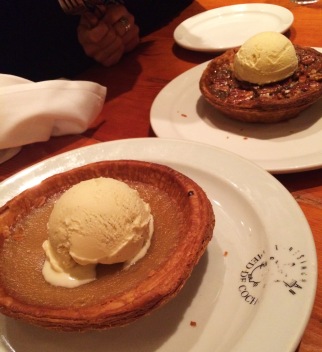 All in all, I know that I’ll be coming back to Au Pied de Cochon before I leave Montreal. It’s been a month and I’m still dreaming about it.

One thought on “Au Pied de Cochon, a Montreal Food-Lover’s Rite of Passage”